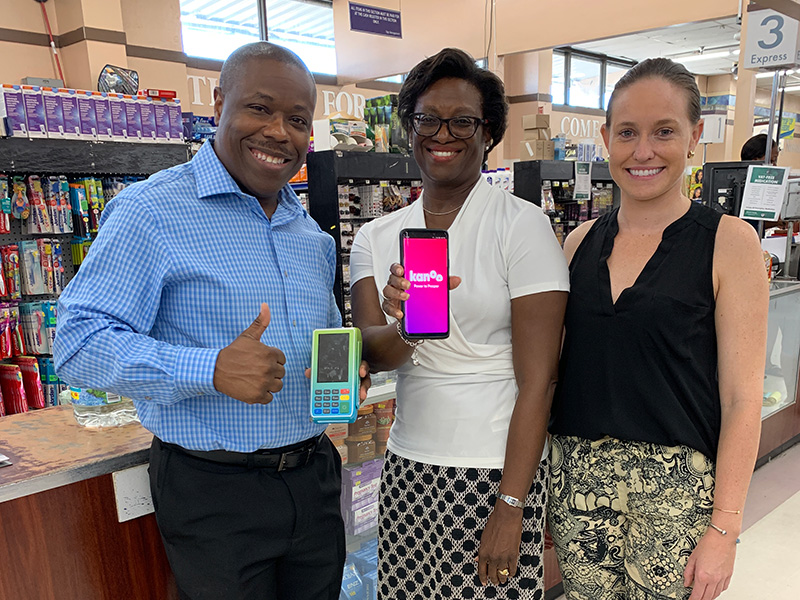 A Bahamian digital payments provider yesterday said it is aiming to sign up 2,000 merchants and half the country’s mobile phone users when it goes “fully live” before year-end 2019.

Keith Davies, Kanoo’s chairman and chief executive, told Tribune Business that its app-based product will ultimately be adopted “in every corner store in this country – big, small and medium – if we have our way and do this well”.

Revealing that Kanoo is now in the final “beta testing” stages, after spending some two years in development, Mr Davies said the FinTech (financial technology) start-up had received “overwhelming” support from all businesses for a concept that aims to provide an electronic “bridge” to consumers via their cell phones.

He added that Kanoo’s platform, which will first be rolled-out through Super Value’s 13 stores, aims to provide the Bahamian private sector with instant payment certainty while also eliminating the costs and risk associated with handling large amounts of cash.

Mr Davies said it will also provide “analytics” and data on how and when their consumers shop, and how much they spend, as well as allowing companies to communicate directly with them and offer incentives such as gift/loyalty cards.

From the consumer’s standpoint, he added that Kanoo will offer improved convenience, choice and access to financial services through the ability to instantly load money into an electronic wallet and conduct transactions.

Further benefits cited by Mr Davies were better inclusion, and a reduction in the number of persons who are “unbanked or underbanked”, with Kanoo tailored to the “pace” at which each user and merchant wants to conduct electronic transactions.

And, keenly aware of complaints about the Know Your Customer (KYC) bureaucracy, he revealed that Kanoo will be able to complete this process electronically within minutes once the necessary identification documents are provided. Successful applicants will then be able to load up to $15,000 to their electronic wallets, and participate in transactions worth up to $2,500 per day.

Herbert Cash, Kanoo’s chief financial officer, told Tribune Business that the number of merchants targeted as initial participants in its “ecosystem” had more than doubled based on the positive private sector reaction to-date.

“Our initial target list for the number of merchants in the ecosystem was 300,” he said. “I think we’re going to hit that relatively easily based on the number of terminals we’ve ordered and merchants we’ve got in, and that’s expanded to 780 merchants.

“There are roughly 300,000 mobile users in the local market. Our goal is we want to be on no less than 150,000 phones and in 2,000 merchants as consumers, inclusive of government, and being a payment leader….. Wherever electronic payments are received today we want to sit there and be one of those payment options.”

Kanoo, whose parent company is CaribPay Bahamas Ltd, has been designed as a “closed loop” community that brings consumers and merchants together in a single space to interact, incentivise and transact through digital payments.

Nicholas Rees, Kanoo’s chief operating officer, told Tribune Business that the company’s app products were akin to having “a bank in the palm of your hand”. He explained: “The whole vision behind Kanoo is really a digital ecosystem or world where users interact, communicate and be incentivised by merchants in a social mobile environment.

“Kanoo is like a bank in the palm of your hand. One of our taglines is: ‘Handling your finances at the speed of light’. Whatever speed you’re at, Kanoo is there for you at the level of transactions you want to engage in. The core of our philosophy is to drive this home and offer services to the unbanked in The Bahamas and cashless services for merchants.

Mr Rees said Kanoo’s digital payments system is based on user and merchant apps, which can be downloaded from the Apple and Google play store once it goes live, and an online relationship manager. Key features include digital wallets, mobile shopping malls, and the ability to benefit from exclusive deals, discounts and coupons/gift cards issued by specific merchants.

Mr Davies, who remains the Bahamas International Securities Exchange’s (BISX) chief executive, added that Kanoo had been in development for “the better part of two years” prior to reaching its current late testing stage with select merchants and interested consumers invited to participate upon request.

“This has been a long time coming,” he told Tribune Business. “It’s a bridge that covers all users and merchants. As a merchant, I will know who my customers are. You are going to put power in the merchant’s hands to monetise their customer base. “We will give merchants the tools to attract more spending to their store at minimal cost and with minimal effort.”

Mr Davies said Kanoo was now seeking to place its units at all of Super Value’s 165 store terminals, having trained all of the supermarket chain’s 200-plus cashiers in how to use them.

He added that Super Value would effectively become a “bank” once conventional locations closed, as consumers will be able to upload/download money into their electronic wallets and use this to shop and pay for groceries.

Revealing that Kanoo is licensed by both the Central Bank and Grand Bahama Port Authority (GBPA), Mr Davies told this newspaper that Kanoo has also partnered with one of The Bahamas’ largest mobile top-up distributors.

He explained that the company plans to leverage its partner’s 100 locations “to be able to load money as easily as you top-up” and conduct transactions/send money to relatives, enabling Bahamians to enjoy payment services after normal business hours.

“If we have our way, and do well, we expect to see Kanoo in every corner store in this country – big, small and medium,” Mr Davies told Tribune Business. “Why do I make that statement? Our app is designed for dealing with cash intensive businesses, which the majority of Bahamian businesses are.

“The vast majority of businesses don’t accept electronic payments. Kanoo is its own closed loop payment. What that means is a merchant is able to receive cashless digital payments either directly through their phone, Android or iphone, or place one of our units on the counter to receive payments as well.

Mr Davies said Kanoo currently has five full-time employees, and operates via a “partnership” model where it uses other entities to supply it with necessary services and products. “We are driving towards this year; before the end of the year is our target to be live fully,” he added.

“We have brought together a collection of young Bahamian professionals to put this company together. Everyone on the ground in this company is 100 percent Bahamian. We have three international partners with skin in the game, and two persons out of Atlanta that are technology partners.

“The technology we are using is our technology. Our partners are part of, and owners, of this company. They have skin and money in the game. This is basically a symbiotic relationship where they work with us, we work with them.”

Via The Tribune Newspaper